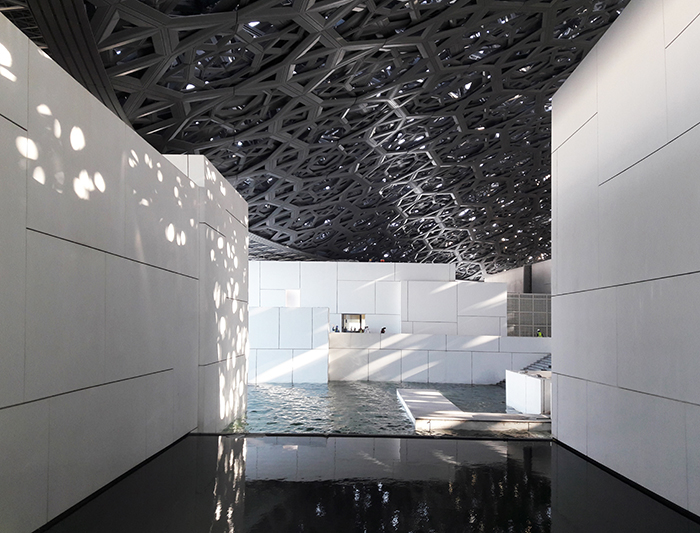 The path of the exhibition is divided in four large chronological periods (given shape by the “wings”):
– archeology, and the birth of civilizations
– medieval times and the birth of Islam
– the classical era, from Humanism to Enlightenment
– the modern and contemporary era, starting at the end of the 18th century

Each wing is divided in galleries that treat and show the different period’s aspects and the transition between those four chronological periods is done by the multifunction rooms named ‘vestibule’. They are at the same time a place to pass through, to meditate, to learn, to rest.
The audio-visual installation is there to complete the museum’s mediation. All along the visit, the visitor will meet those tools in passive or interactive approaches. The technical installations follow the word’s cultural development without fade the collection exhibition and allow to target different type of public, through different communication channels.
The core of the audio-visual system is based on a high-end digital signage architecture. The main server is installed in the main technical room, and manages all the local solid-state players, connected in star topology.
The exploitation team can monitor all the audio-visual installation at a glance and be received device alarms (disconnected or over-heating player, media missing, etc.).
The digital signage tool allow to update media from any location in the museum, through online administration console. Which makes the installation very robust is the fact that the content is pushed to the player and stored locally. So even in case of network failure, the content is played.
The system drives standard digital kiosk, as well as large scale projection, and multiple UHD screens displays with multitouch ability. Like this, all the audio-visual installation are manage from the same platform, easing exploitation and maintenance.

There is several type of audio-visual installations, all manage by the digital signage system:

Off-centered in the North of the museum, the multi-purpose auditorium of 271 seats faces to the sea. A wide opening at the bottom of the stage allows to contemplate the peace of the bay of Abu Dhabi. This window integrates a projection screen and its motorized framing which can give way to multiple configurations of the screen or the opening on the outside. An occultation system allows to turn the auditorium into the dark.The architectural ceiling of the auditorium consists of a network of tubes steel forming a linear weft. Some of these tubes are motorized and then used for the scenic lighting.
Other scenic equipments, such as a large screen of cinema, a curtain of front stage, an acoustic curtain and an occultation curtain complete the mechanism.

The venue contains two control rooms one on top of the other : a closed high control room and an open low control room which is of use to the projection. The auditorium also includes two cabins of translation.
Besides the studies and besides the follow-up of the implementation of the scenic equipments, dUCKS also oversaw the installations of the material of broadcasting and the lighting equipment. The auditorium is equipped with audiovisual equipments of last generation including a large 4K projection. The audiovisual and lighting networks serves the stage / room spaces, the side galleries, the backstage and the lobby.
The auditorium is connected with the rest of the museum and the outside through a system of video conference.

In the 2 000m² temporary gallery situated under the dome of the museum, 168 beams compose the architectural ceiling imagined by the architect Jean Nouvel and the lighting designer 8’18”.
The motorization of the sliding beams allows to position each of them according to the architectural and scenic needs of the cultural and artistics events.
The same device composes the ceiling of the children’s museum.
Besides the implementation of these ceilings, dUCKS scéno had also participated during studies in the definition of the technical and scenographic needs (network, loads etc.).
Mission

Scenographic design of the exposition spaces, multimedia design and infrastructure, design of video projection installations, design of an auditorium, including all theater machinery, AV and media systems and theater lighting systems.

Under its dome of 180m of diameter (590 feet), the Louvre Abu Dhabi Museum reveals its 6400 m² of permanent collections and its 2 000m² of temporary exhibitions nested at the heart of the bay opened on Persian Gulf. The origin of the project raises in 2007, when the TDIC (Tourism Development and Investment Company) commands an antenna of the Louvre on the Island of Saadiyat, called to become a cultural district compound of several museums realized by some of the most influent architects of the era. The adventure of dUCKS begins in 2008 when Jean Nouvel’s agency asks us to join its team of project management to realize the scenographic and engineering studies  on a major part of spaces of the museum :
– Permanent Galleries
– Temporary Gallery
– Children’s Museum
– Lower Plaza
– Auditorium
– Bar and Restaurant

See all projects
Museum and exhibition